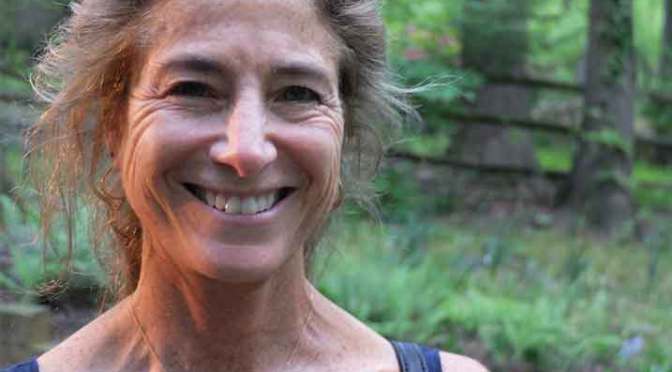 Over the years, Tara Brach met so many people expressing a feeling of unworthiness that she created her own method for self-compassion – radical acceptance. Today she is one of the West’s most famous meditation teacher. Thousands of people every day are down-loading her guided pod-meditations from the website.

“Although we intellectually can understand how hard we judge ourselves, we’re not aware of how deeply it impacts everything of us. Everything”

When Tara Brach listens to all those standards people try to meet, she hears that they really have a hard time forgiving themselves. They are not the person they wanted to be. Not the parent they wished, not the friend they hoped. They have not contributed to anything, not made the career they should, not been enough good…

“It is deeper than just disappointment. There is a permeating feeling of being imperfect, flawed, inadequate – deep down. There are almost no words for this core of shame”, Tara Brach says, one of the United States’s most renowned meditation teacher.

People’s experiences of “there ‘s something fundamentally wrong with me” made her write her first book in 2003, “Radical Acceptance”. Readers sent her e-mails about how they finally began to have peace of mind. Eight years ago Tara Brach changed career – left her work as a psychologist and psychotherapist and went full time into Buddhist teaching. In this, she has almost exclusively  how to make peace with yourself.

I meet Tara Brach just before an evening class with members of the Insight Meditation Community of Washington, an independent Buddhist center which she founded in 1998 and today is one of the largest in the US. The last few years, Tara Brach’s business has grown strongly and the site’s podcast with free guided meditations have 3,000-4,000 downloads every day. Here she teaches how to practice self-acceptance and become reconciled with one’s life. People from all over the world sign in and comment.

What do you think lies behind the need?
“A universal longing for something that can instill calmness in a seemingly unreliable world that moves faster and faster. Many feel the threat of increasing climate change, greed, and consumerism, and experience an imbalance in their own lives. How do you make peace with a world that is beyond your control?”

Tara Brach knows what that question means — in person. In 2005, the symptoms that had influenced her joints in 20 years were diagnosed: an incurable genetic disorder in the connective tissue. She was forced to lessen her outdoor sports and stop with such activities as wikeboard, cycling, swimming and jogging.
“My knees were so bad I couldn’t even walk in sand. Suddenly I realized that I eventually would not be able to do anything of all those things I loved. Especially to be on water. I was faced with a situation in which I wondered: How am I supposed to love this life anyway?”

It was a painful time. Tara Brach has been open about her depression, and in her latest book, “True Refuge”, she writes about how it is possible to be happy even though you have to face difficulties and losses. How she found her way there, she touches upon  by quoting the Persian 13th century poet Rumi: “We shall not seek for love, but for the barriers we have created against it.” Then she returns to what people tells her about how they depreciate themselves.
“Many have carried the feeling of not being good enough as long as they can remember. When I ask how it has affected their lives, they often respond that it’s prevented them from feeling close to someone else.”
For most people, this insight often signifies “an ouch moment”, as she puts it, and therefore also a hopeful turning point – if talking to Tara Brach. She’ll get back to this later.
“I think the way is – to see what stands in the way”, she states.

Here’s how: as self-critical, it is impossible to listen to one’s own needs. One never allows oneself to relax or be in the present moment. To constantly hang out with the uncertainty about whether I’m okay or not, creates a distance – not only to others but also to oneself, Tara Brach explains. She likes to call this state “a trance of unworthiness”.
“I call it a trance, because although we intellectually can understand how hard we judge ourselves, we’re not aware of how deeply it impacts everything of us. Everything.”

Tara Brach is confident about that the sense of self-loading is permeating our time, and believes this is associated with us constantly being on-line, because then we get “off-line with the cultural world”. We lose touch with ourselves, our inner values and natural rhythms, she says (watch the video clip at the bottom of the page).
“I think we’re disconnected from social structures to a greater degree than in the past. We have less connections to inherited family communities and other groups. Instead, we  need to be a certain kind of person to be included in different contexts – not too needy or too angry. Or we think we must meet specific standards to be considered okay. This can be applied to both at home, at school and at work. Whatever we do, it’s like we’ll never get any guarantees to get included anywhere. We never feel relaxed.”

Feelings of unworthiness also hampers our lives on other levels, she says – it keeps us from getting in contact with the deeper areas of love and creativity. For daring to express ourselves in a new way, we need to take risks. This requires both courage and a certain trust.

How do we get that trust?
“By giving ourselves compassion. If the illness in our time is that we disconnect ourselves from our inner life, kindness to ourselves is the way to reconnect inward. It is the most direct way to open up to a deeper connection also with the world around us.”

But in order to get this to work, we need the courage to stay in contact with our vulnerability, with or most hurting feelings inside, according to Tara Brach. This is often a challenge to us; we all have an instinctive resistance to difficult feelings. But if we can endure them, there will be an “opening”, Tara Brach says and gives the example of how the feeling of unworthiness stands in the way of being close to others.

“You can’t become intimate with another human being if you’re constantly concerned with ‘what if he or she finds out who I am deep down ‘. Then you simply can’t be true. The insight may achieve a sort of ‘ouch-moment’. You suddenly grasp how this war with yourself has prevented you from being alive.”
But in the midst of this painful insight, we also have the possibility to a turning point, that something new might happen. An opening. The first, according to Tara Brach and others teaching ways to be kind to yourself, is to get in touch with what’s causing the pain. Then we can offer ourselves compassion, which they think is one of the best antidotes to shame.
“We’re wired for a natural receptivity to care. But not many are used to let it come in”, Tara Brach says. “I usually ask people to think about how it feels when others care about them and show compassion, but already there, they say they can’t receive it. The realization that we are not really open to others’ love is a revealing moment.”

To shift to the ability to receive kindness and care, we can give ourselves a physical touch. Tara Brach usually suggests that you put your hand over your heart or stroke your cheek. It feels embarrassing, she knows, so she exaggerates the gestures.
“Most people have not been taught how to receive care. Therefore, it isn’t natural for us to show affection for ourselves, so we have to develop it on purpose. And practice.”
Feelings of unworthiness are like a “hub” for self-absorption, Tara Brach likes to say. It’s easy to believe that one is separate from everyone else, alone in the world. Those who can imagine others’ kindness and receive compassion and care will experience a “radical shift in their view of themselves”:

“It softens their borders, which they otherwise tend to fix around themselves and their concern about being inadequate. Then, they can stop identifying themselves with not being good enough and become much more open towards others. It broadens the perception of your whole person.”

What is radical acceptance? “We think we have to be different than we are to be loved”, Tara Brach says in the video, referring to what dying people are said to regret the most: that they were not more true to themselves.

R – recognize. Notice your sensations in the body.

A – allow. Allow the feelings to be, without judging or condemning.

I – investigate. Where in the body do you feel your emotions?

PhD in psychology, psychotherapist and meditation teacher. Founder of The Insight Meditation Community of Washington.

In progress: A new mindfulness program along with meditation teacher Jack Kornfield. To be found also as on-line education in different languages. The program will have three main tracks: Mystery of Man, Ethical Guidelines and Engaged Spirituality. Various aspects of happiness and well-being, compassion and how we take care of each other in the world will be built in to the exercises.