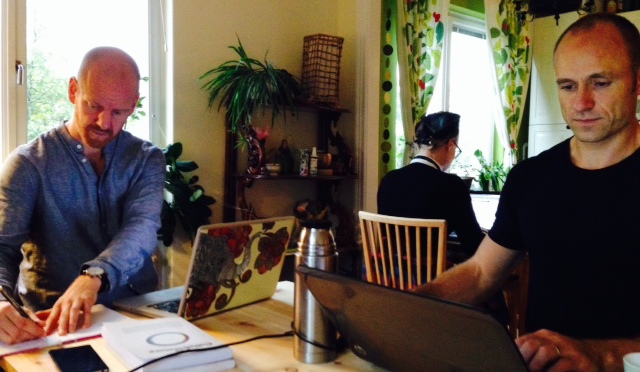 Would you like some working company, even though you’re not employed, and even though you can’t afford a freelance office? Would you like to support others who want to create a more sustainable world, and get the same support yourself?  Read my story about the new Swedish concept Hoffice (also published in Svenska Dagbladet Näringsliv):

He can provide seatings for ten, eleven people – if some would mind working in the sofa or an armchair. They can use his kitchen and fast Wi-Fi. And he has a quiet room for phone calls – “though of course it will be our bedroom”, as Amrit Daniel Forss clarifies in his Facebook invitation to arrange Hoffice in the apartment at Reimersholme in Stockholm, Sweden.

Hoffice is a Swedish concept where you work at others’ homes, together with others. It is always free. In return, participants support one another with both company and discipline: Work sessions are clocked and interrupted with a break activity. Everyone tells out loud what they aim to do before each session, and afterwords what they actually achieved. Lunch time is fixed jointly – “I have cleared in the fridge so you can store your lunch boxes” – and there is a Hoffice event somewhere in Stockholm several times a week.

”It is a kind of gift economy”, says psychologist Christopher Gradin Franzen, 35, one of the initiators. ”We open our homes as a gift to ourselves and to others who wish to contribute within the structure.”

The day I’m joining for this story the apartment is full. Amrit gets help setting up extra tables on trestles and Gösta takes his favorite spot in a Lamino armchair. 45 minutes at a time, we only hear the wall clock – tick-tock, tick-tock – and laptop key sounds. Or how someone suddenly gets up, and whispering disappears with the mobile phone. Then comes the alarm signal. It is time for the ten-minute break with stretching, meditation – or, why not, disco dancing?

November last year, Hoffice started as a way for Christopher Gradin Franzen and his buddy Johline Zandra to get more social context during the working day. They liked the flexibility of not having a fixed office, but also discovered that they were not getting things done sitting alone at the kitchen table.

”We decided to invite ten people each to create a more work-like environment in our own homes”, he says. ”We never thought it would be bigger than that.”

Now, more than 700 members have joined the Hoffice Facebook Stockholm group and several other groups around Sweden and Denmark have been formed. People sign up for both togetherness and discipline, and the structures for a day are not taken out of the air. Christofer Gradin Franzen has studied psychological research on what is making us work the best (see facts below). It is basically about attaining focus and getting things done.

The latter is the reason why people declare their tasks for everyone before a session starts:

”I’ll write a scholarship application that must be turned in before one o’clock today”, says Rebecka Pershagen, 28, an actor who has launched an app for location-based theater.

”I’ll design a newsletter”, says Andreas Sidkvist, 33, who is a trained project leader and has developed a web-based program for sustainable change in behaviour.

In the room, silence sweeps everyone in again. During the next break we send each other hand-clappings to get new energy and then tells what we want to reach during the coming session: The architect Petra Karsenbarg will continue with an interior design project for Danderyd Hospital and Amrit with editing his film. Christofer will prepare a teambuilding he is to lead in Åre, northern Sweden. At 12 am, sharp, Rebecka stretches her hands in the air and whispers-screams ”Yeees! Now I’ve pressed the send-button” and gets a round of applause.

Christofer describes Hoffice as a change movement to support others to ”be able to do what they are passionate about” – as working for a more sustainable world. At lunch, we talk about shopping at second hand, AirBnB-financed housing and the need to work for one’s own true values (Petra is pointing to her heart).

”We wanted to create structures for people who’d like to follow their visions”, Christofer explains. ”Often these don’t fit within the frames of existing organizations.”

He himself has recently lectured for Stockholm students (at the royal technology institute KTH) who are interested in using Hoffice structures as an aid in their studies. Which in turn has made Stockholmshem, a residence constructing firm, curious to make Hoffice-ideas part of their coming buildings in the suburb Bagarmossen. The Finnish think tank Demos Effect has invited representatives of Hoffice to attain a workshop about developing sustainable cities.

Back to the apartment in Reimersholme. During the session right after lunch Amrit is highly concentrated in his headset – “finally, I can hear what they really say” – and does actually finish his film-editing. Rebecka allows herself to take hold of her social life on Facebook and Gösta is at first a little fragmented. But, when the day is over, he notes:

”This is such an efficient way of working. I have invoiced, I have completed some documents and really ticked off my to-do-list. I’m so satisfied.”

Different closed groups on Facebook where people invite others to share workingplace in their homes for free. The host creates an event with information about date, number of places available and facilities like Wi-Fi and telephone room. Members being hosts are increasing, as are members having Hoffice as their everyday office. Since this story was published in Svenska Dagbladet, six new Hoffice groups have been formed in Scandinavia.

The working sessions are clocked. Everyone is welcome to contribute with proposals to different break activities and lunch topics. For the more social lunch break, the idea is to avoid too superficial subjects in order to build trust between the participants. The purpose of Hoffice is to support those who do not have jobs and offices and who want to work for something they dream of. Often it’s a more sustainable world.

Best workday, according to psychology and action research

Time per shift: 45 minutes, no one can concentrate for more than 40 minutes at a time. Some few extra minutes in “start-up cost” with each session are added. People not ready to break when the alarm clock rings make a sign and will not participate in the break activities.

Concentration: Mindfulness and physical activity increases the ability to focus and will be practiced alternatively during the ten minute breaks. Participants agree jointly what kind of activity they want to choose each time.

Social accountability: To plan what one likes to reach the next 45 minutes and during a full day, and to say it out loud before each session, increases the chance that one actually gets things done. In some Hoffice events the group will applause when someone has completed a task.

Time span: It is difficult to estimate how long time a task will take, even though it is one’s own ideas and plans. Telling everyone after the session what you really got done creates a feedback loop – a way of learning about time consumption from one’s own work processes.