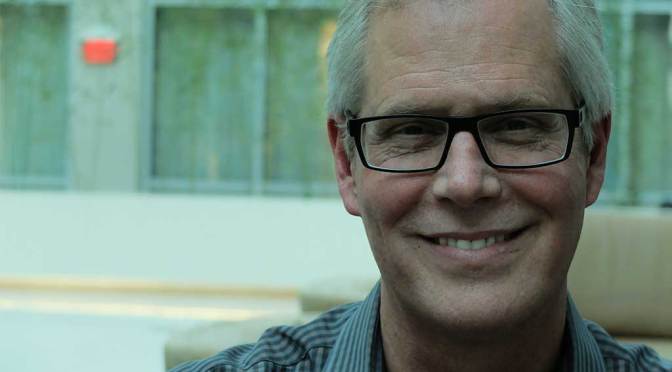 Supporting yourself in the same way as you would support a good friend in a difficult situation. That’s how Christopher Germer defines self-compassion.

He also asks people to think about how they typically talk to others who have made mistakes – and compare it with how they treat themselves when they fail or feel inadequate.

“This often shows our lack of compassion for ourselves”, says Christopher Germer, PhD, clinical psychologist and psychotherapist in the US. For more than 30 years he has been using mindfulness and compassion in his work with clients.

What is self-compassion. Christopher Germer?

In 2005, he was co-editor of the book “Mindfulness and Psychotherapy” which came to have an unexpected importance to his personal history. When we meet at a  Wisdom and Compassion conference in Washington DC, he talks about his life-long anxiety and shame that used to haunt him in exactly this kind of situation: Christopher Germer is one of the key-note speakers. This would have meant great difficulties for him before 2005. Throughout his life, he had suffered from “a terrible fear” of public speaking. Some times, this was so obvious for the audience that he could hear someone out there shouting “Breathe!”. Now he travels all over the world since the program Mindful Self-compassion took off in 2010 and from there has grown far beyond the United States. 2014, the first 280 teachers world wide were trained.

In addition to all over his own home country, US, Christopher Germer has held courses in Australia, China and ten European countries. Wherever he has been, people treat themselves the similar way when they experience failure and setbacks: with self-criticism. Everywhere, he also see them experience a similar relief when they stop being their own worst enemy.
Behind the self-criticism he knows there is another lowest common denominator – shame.

“How we respond to shame is universal. We react in the same way –isolate ourselves, become self-absorbed and trapped in rumination. It is like a basic instinct. The difference round the world lies in what we are ashamed of in different countries.”

You also have had a self-compassion programme only for men. Do you see any gender differences?
“We direct our self-criticism against a variety of things”, he says and points out that his gender observations only are anecdotal, not based on research.
“Women seem to feel shame for being selfish and if they show anger, the kind of thing that makes them ‘awkward ‘. Men are ashamed of weakness and if they feel vulnerable, so they use to be reluctant to acknowledge feelings at all. This means it could be harder for men to get over the threshold of self-compassion.”

“Women seem to feel shame for being selfish and if they show anger. Men are ashamed of weakness and if they feel vulnerable.”

That hardship is exactly what he experienced himself, that time in 2005 when the interest in mindfulness began to grow and he got a lot of requests to give talks about the book. On a week-long retreat for mindfulness instructors the mere thought of speaking in public became completely overwhelming. He suffered a “dark night of the soul” and brought up his anxiety with the teacher.
“I think you should just sit on your cushion and love yourself”, the teacher had recommended, thinking about the loving-kindness meditation practice.

When Christopher Germer tells us his story at the conference, he has no longer any problems standing in front of us. But faced with the very first speech, after months of meditating on the phrases “May I be happy, may I have the health, may I live with ease”, the hostile voice came back on his way to the stage: You’ll never make it … His heart beat and his breast tightened.
“Suddenly I also heard the words May you be happy, may you live with ease …  and my anxiety just ran off. I was very excited and heard the voice inside Yes, may all beings in the world be happy!

By deliberately be kind to himself, he could suddenly stay with feelings that he never before had endured. It allowed him both to accept the anxiety and, as he puts it, “to be with all the shame I had about it”. The key was that he had learned how to direct warmth and understanding toward himself.
“Shame makes you turn away from yourself – and from others. That strategy prevents us from moving on in our lives. To get out of shame, we need an arm around us, people saying they love us and don’t want us to have such a hard time. But we don’t do that with ourselves, but rather become judgmental and self-critical.”.
To be able to give himself kindness when the anxiety was about to take over, was like “having someone with me whatever happens” Christopher Germer explains. When there is nobody else there, he knows how to comfort and care for himself.
“That’s how I discovered self-compassion as an antidote to the shame in my life.”

What is the core of that antidote?
“That we stop fighting ourselves – which we do when we wish that we, or what we’re experiencing, should be something else than what it is. When we realize the common humanity of being imperfect, insecure, struggling with life’s difficulties, we can let go of the resistance. That’s when we start learning how to be fully human.”

“That’s how I discovered self-compassion as an antidote to the shame in my life.”

For many years, Christopher Germer studied clinical material about what really works between the therapist and the client. A large part has to do with the reciprocity during the session. Over time, therapists usually witness how a human warmth rub off on the client, who in turn will build upp the confidence that will lead to healing.
“But sometimes not. The warmth and the strength of the relationship does not follow the clients home. Exercises in self-compassion can be a way to repeat what is happening with the therapist, a kind of self-to-self-relationship that they can practice at home.”

That’s how Christopher Germer, along with Kristin Neff, began developing the program Mindful Self-compassion, MSC. Seen from the therapist’s perspective it is “a portable therapy”, while waiting for what usually happens in the therapy room will rub off on the client.
“You talk to yourself in the same way as you would with someone you care about. That’s how you always should be with  yourself – caring about rather than criticizing.”

Self-compassion, Christopher Germer says, includes both compassion and love. Still, the term has no religious basis. He once asked representatives of the five world religions to show him quotations from their scriptures, saying that people can and should be friendly to themselves first.
“None of them could find such a quote. Some are about that God loves us, and that’s why we are worthy of love, but there seems to be nothing about that we can love ourselves.”
Christopher Germer thinks that the ancient religious leaders postulated that people already deeply accepted themselves, from where they would teach the love of the neighbor. Love your neighbor as (you already love) yourself.
“In our time, we can’t assume that people love themselves more than others. It’s probably easier for us to have that feeling for a child, a pet, a grandmother or grandfather. Today, we need to go the other way round in helping people to find a way to love themselves. It’s a completely reverse order.”

“Today, we need to go the other way round in helping people to find a way to love themselves. It’s a completely reverse order.”

Why is it like that, do you think?
“Although we have a lot more social interactions than before, we’ve become more isolated. We don’t spend enough time together with others to create a stable and secure social context.”

Peaceful co-existence makes us feel calm and secure, that is how we are physiologically wired: caring for others activate compounds for well-being and is moderating stress. In warm connections with others we can switch to this secure and contented state,  Christopher Germer explains.
“Competition, the pursuit of independence and to be productive, however, create a stressful state. For our brains, this will be like living under a constant threat – if we don’t, at the same time, have a secure community with others.”

Why self-compassion is an anti-dote
In shame and setbacks, we have three automatic responses related to the threat system: self-criticism (fight), feelings of loneliness and isolation (flight) and stuck in self-absorption (freeze). Self-compassion means quite the opposite. Instead of getting the fight-flight response activated, you can connect to the soothing system: Be kind to yourself instead of self-critical. Be aware of the common humanity instead of feeling alone and isolated. Be mindful so you don’t get stuck in self-absorption.

Christopher Germer:
PhD and clinical psychologist, focusing on psychotherapy with mindfulness and compassion. In 2010, he created the programme Mindful Self-Compassion along with psychology professor Kristin Neff.

In progress: Courses in Mindful Self-Compassion has spread all over the world. The first round of teacher training (Step 2 Intensive) on an international basis was carried out 2014 with 280 participants, of which around 50 from Europe. Now, there is teacher training also in German, Spanish, Chinese and Korean (South Korea).